What Are Earwig Insects?

Earwigs are insects of the Dermaptera family. The body is long with tiny appendages “cerci” on the abdomen. The earwig has been shown to invade the living spaces of humans. With the help of their cerci, the earwig has the ability to defend themselves from predators and replenish their food supply. The adult earwig is approximately 1/3” in length with a brownish/red body. The only exception to the average earwig size is the Saint Helena Giant species, which has been recorded at three inches in length. Scientists have recorded more than 900 species of the Dermaptera family. According to an ancient tale, an earwig was discovered in the brain of a human where it laid eggs.

Why Is My Home Infested With Earwigs?

Earwigs are notable for migrating indoors when it is hot outside. While these insects prefer warmth to cold, they will migrate indoors during the hot summer months. These insects prosper in warm, dark, humid environments, which is common in basements, crawlspaces, and attics. No one wants to even consider sharing the same environment with earwigs but it does happen from time to time. In fact, earwig infestations are more commonly reported in the summer in Richmond, Virginia than in any other season. The nocturnal behaviors of earwigs allow them to escape detection for days, weeks, or even months in many cases. This is very unfortunate because these pests are notorious for the damage they leave in their paths. If your home is infested with earwigs, it is probably because you and your family unintentionally invited them indoors.

Experts do not consider earwigs as dangerous insects. However, scientists do believe the earwig can cause problems for humans when it makes its way indoors. While the main target is always a potted plant once they enter a home, there is not plant 100 percent safe. In their natural habitat, the insect can be found in or around flower gardens. In fact, there is no garden-like area off-limits to these insects. Not all earwig species are fond of plants. Some species prey on smaller arthropods and insects. This is pretty much the only time an earwig is considered handy for gardeners and farmers. Otherwise, the insect poses major risks for the farming and gardening industries.

How To Eradicate Earwig Infestations?

This is a complex answer because earwigs tend to colonize in large groups. Basically, where there is one earwig, there are dozen more lurking around close by. Fortunately for homeowners, earwigs generally do not colonize indoors. However, they are known for targeting homes with indoor garden rooms. Even if the home only has a few potted plants, it will be a potential earwig target. But, if the insect has an option, it will always choose bigger over smaller any day of the week. To eradicate an earwig infestation, it is crucial to start by preventing the colony from expanding. This is a minor task that just requires caulk and a dispenser. Walk around the perimeter of your home looking for potential earwig access points, which can be the size of a small crevice near windows. Utilizing the caulk, seal all potential access points before moving to the next step. In this step, you will need to transition from mercury/neon vapor lighting to sodium vapor lighting with a yellow tone. This is just the beginning of a long and never-ending process if you decide to take the DIY earwig pest control route.

When Should I Expect The Exterminator To Arrive At My Home?

When you contact our local Richmond, Virginia office, you will be immediately connected to one of our earwig experts. You will be scheduled an appointment for a free in-home inspection within 24 to 48 hours of your initial phone call.

Is Earwig Pesticides Safe Or Harmful?

There are several types of pesticides utilized to combat earwig infestations. These include organic, standard- and commercial grade, and chemical-based, all of which have been deemed “safe” by the US Environmental Protection Agency (EPA). To protect our customers and their assets, we only utilize pest control products approved by the EPA. When administered properly, EPA-approved pesticides pose little to no risk to humans, animals, or the environment.

How To Prevent Future Earwig Infestations?

Once a home has been infiltrated by earwigs, its natural insect barrier becomes vulnerable to future infestations. This is very common and only to be expected because earwigs leave devastating damage in their paths. Our job is to eradicate the infestation and start repairing your home’s natural pest barrier to prevent future infestations. We start by eliminating moisture in common high-humidity areas, such as the basement, crawlspace, attic, and sewage system. We recommend dehumidifiers with improved ventilation to reduce humidity in these areas. We understand moisture is important to indoor plants, which is why earwigs are drawn to them. Contact our Richmond office to learn more about our earwig infestation prevention.

If you have any other pest control issues please check out other services. 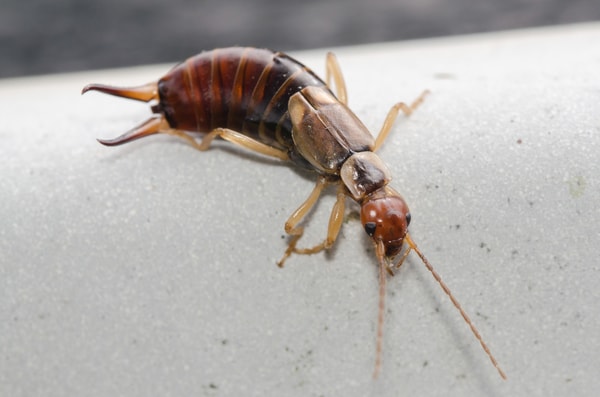